Energy Expert from the Netherlands visits SynCat@Beijing and Synfuels China

His lecture “Electrifying the Future: the Enabling Role of Renewable Energy-driven Chemistry” addressed the future role of electricity for producing fuels and chemicals. His institute DIFFER, with a headcount of about 150 scientists and technicians, focuses on two major themes in the arena of future energy, namely Solar Fuels and Fusion Technology.

Photo: Richard van de Sanden (middle) is introduced by Hans Niemantsverdriet before his lecture in the Einstein Lecture Room at SynCat@Beijing

The latter subject is a tremendous technological challenge for the future, especially with respect to the extreme temperature conditions, and the generation of highly damaging radiation. DIFFER disposes over unique accelerator system where the impact of highly energetic particles on the walls of a tokamak reactor can be simulated.

In the Solar Fuels program, DIFFER collaborates intensively with Syngaschem BV, the European research partner of Synfuels China. Together they perform research in the areas of water electrolysis, and synthesis gas chemistry, in a program which receives significant funding from both Syngaschem/ Synfuels China and the Netherlands Organisation for Research.

The lecture, which presented among others and interesting perspective on the future of energy technologies was received well by the audience and led to many questions. After the lecture Richard van de Sanden met with Drs Yong-Wang Li and Yong Yang, and he received a tour through the facilities of SynCat and Synfuels, where he showed strong interest in the scale model and the 3-D simulation of the new Fischer-Tropsch / CTL plant.

The visit was concluded in the Grand Hotel with a delicious Chinese Dinner and animated discussions. Late in the evening he returned to Peking University for another lecture on the next day. Drs Li, Yang and Xu intend to visit the DIFFER Institute later this year, to consolidate the contacts and cooperation with Syngaschem BV. 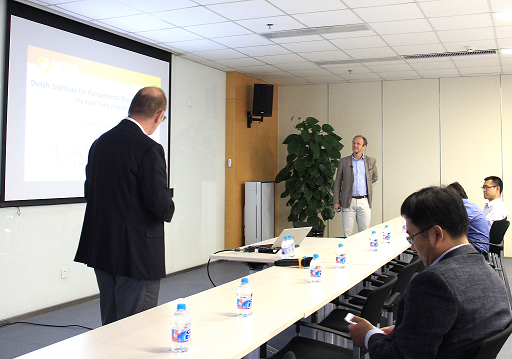 A joint workshop of SynCat@Beijng and DENSsolutions