Syngaschem BV was established in May 2013 to support the development of SynCat@Beijing, and to set up its own research facility. Five years later both laboratories, in Beijing and Eindhoven, are in full swing. To celebrate, Syngaschem sponsors several scientific conferences this year, see the special advertisement for this purpose.

Why Syngaschem BV?
In Jan 2013 Profs Yong-Wang Li, General Manager of Synfuels China Technology in Beijing-Huairou and Hans Niemantsverdriet, Professor at the Eindhoven University of Technology, decided to join forces and build a new internationally oriented laboratory for fundamental research on catalysis for synthesis gas technology, SynCat@Beijing, with a small branch in Eindhoven.

Syngaschem BV has been established as a Dutch enterprise to support recruitment of international staff and acquisition of instrumentation for SynCat@Beijing. Syngaschem also runs a small laboratory under the name SynCat@DIFFER in Eindhoven, which started at TU/e but since two years is housed at the national Dutch Institute for Fundamental Research and runs fundamental research projects related to synthesis gas utilization and generation.

Syngaschem’s Activities
Five years after the start, both SynCat laboratories at Beijing and Eindhoven are in full swing and Syngaschem BV is proud on several achievements in its first 5 years:

For the future, Syngaschem BV likes to position itself as an attractive partner for joint projects (with SynCat@Beijing, but also in European and international research programs), contract research, or for short courses in catalysis, and in scientific leadership development. 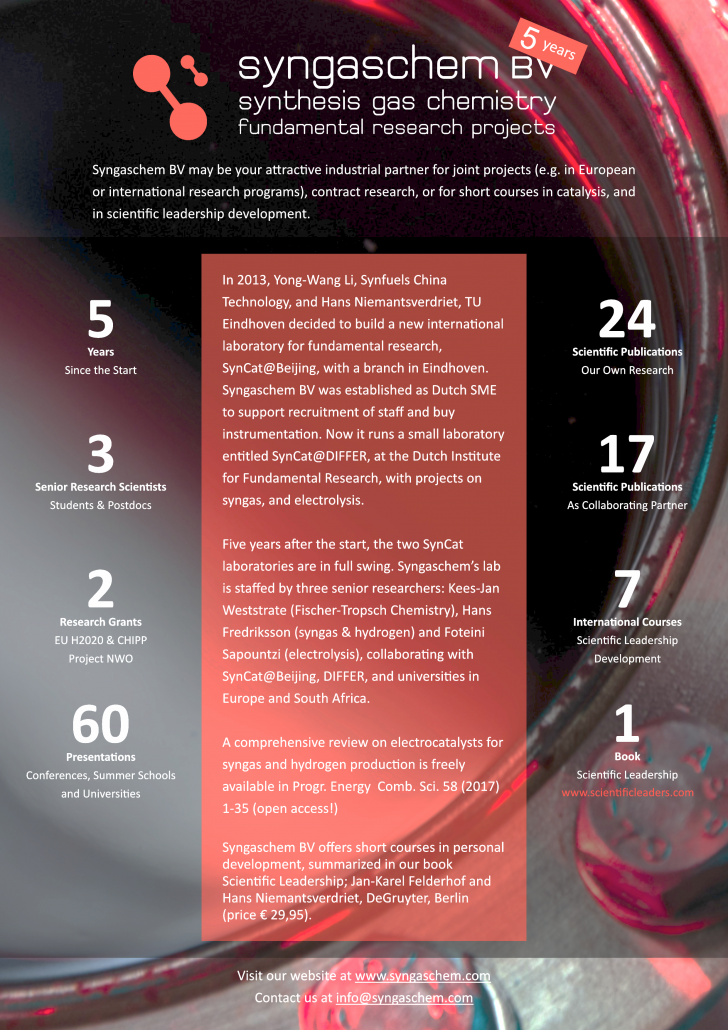 Honorary Professorship for Hans Niemantsverdriet at University of Cape Town