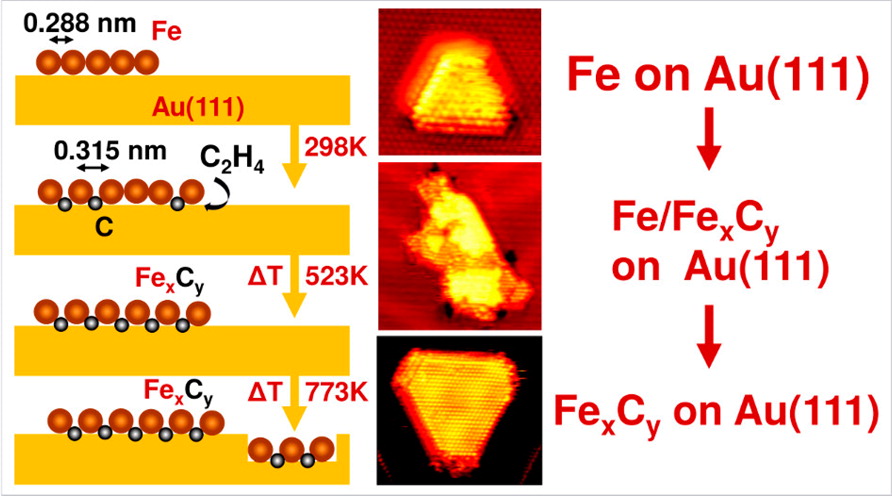 Gilbère Mannie, working for Syngaschem BV in the iNano Group of Professor Jeppe Lauritsen in Aarhus University, Denmark, found a novel way to study atomic details of iron carbide surfaces by scanning tunneling microscopy (STM). Starting from a gold single-crystal surface, a time-tested convenient and chemically inert platform, he evaporates thin films of iron, which he then converts into carbides by exposing them to ethylene gas. The figure shows the carbide layers form: C2H4 dissociates at the edges of the iron islands, after which the carbon diffuses inward to form FexCy. These structures may be a good starting point for investigating iron carbide surfaces present under Fischer-Tropsch synthesis conditions.

In a computational project jointly sponsored by Syngaschem BV, Synfuels China, and the Netherlands Organization for Science (NWO-ECHO), Olus Ozbek investigated the surface reactivity of iron carbides. He addressed the question how these ‘passivated’ surfaces can be chemically reactive enough to activate the carbon monoxide molecule. His approach was to systematically introduce defects in the carbide surface, and test the structure for dissociative adsorption of H2, adsorption and dissociation of CO, and hydrogenation of the carbidic carbon. 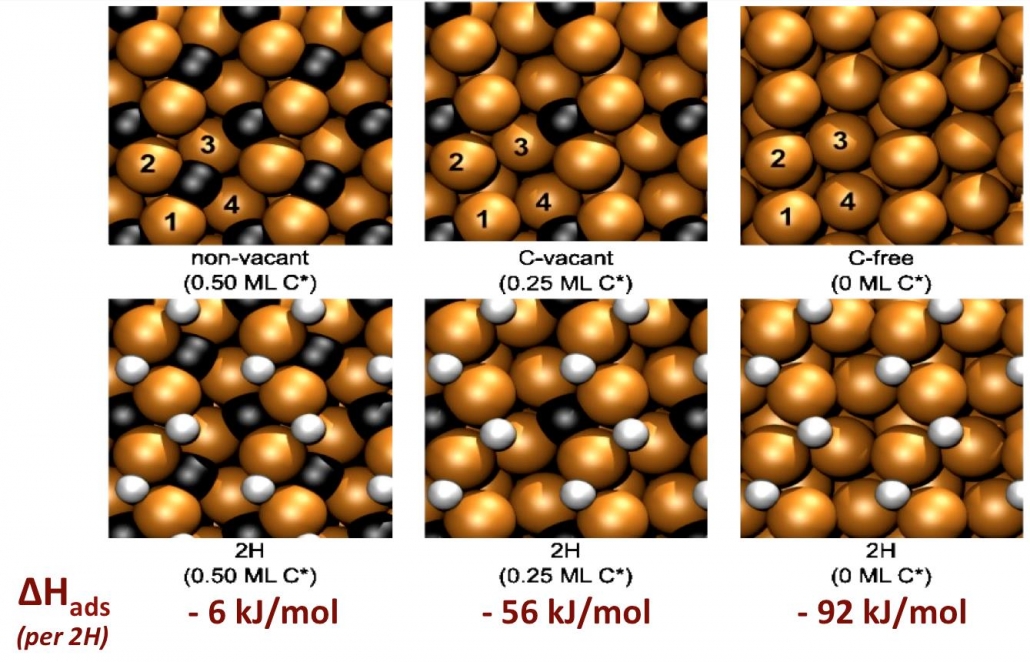 The figure shows the perfect and defect structures of the carbide (iron brown, carbon black), and the adsorbed hydrogen atoms, along with adsorption energies. It is clear how H-atoms bind strongly to the more vacant surfaces, as expected. These are also the surfaces that have no difficulty whatsoever with activating carbon monoxide. The perfect carbide surface, although chemically quite inert, is easily hydrogenated by H-atoms, to form the vacant surfaces with CH-groups, which may then be involved in formation of methane and higher hydrocarbons, in a way explored earlier by Syngaschem scientist Jose Gracia during a postdoc position at Eindhoven in 2009 (J. Gracia, et al., Catal. Lett. 133 (2009) 257-261). Two future papers will deal with the formation of methane, formaldehyde and methanol from syngas, and with the chaingrowth to ethylene, ethane and ethanol. 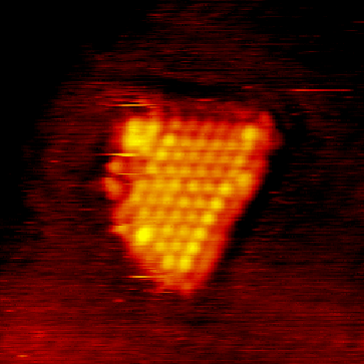 Future SynCat@Beijing staff gathers at Huairou near Beijing, and brainstorms...
Scroll to top