SPECS engineers led by Dr David Schuhmacher demonstrated the performance of the equipment using a sample of graphene on Ru(0001). They obtained excellent results during the STM experiments.

SPECS combined NAP-XPS and NAP-SPM in the surface science labs on SynCat@Beijing (left); the reactor cell of the SPECS NAP scanning probe microscope, which can be used for in-situ SPM experiments at 500ºC and 100 mbar (right)

These relatively unspectacular benchmark experiments indicate the spectacular opportunities, that the SynCat@Beijing lab will have in future to realize its research philosophy. They also mark the beginning of the end of an exciting period full of planning, recruiting, and preparing activities. It is worth to recall at this point, that the decision to found this lab has been taken not earlier than in 2012, while construction works started in 2013 and ended in late 2014.

An image of graphene on Ru (0001) taken at a pressure of 10 mbar, showing carbon atoms as well as a clear moiré super structure (left); Dr David Schuhmacher from SPECS surrounded by Drs Shuli Yin, Yuqun Xu and Gilbère Mannie during one of the STM/AFM test experiments (right)

Of course, the coming period promises to be even more exciting… 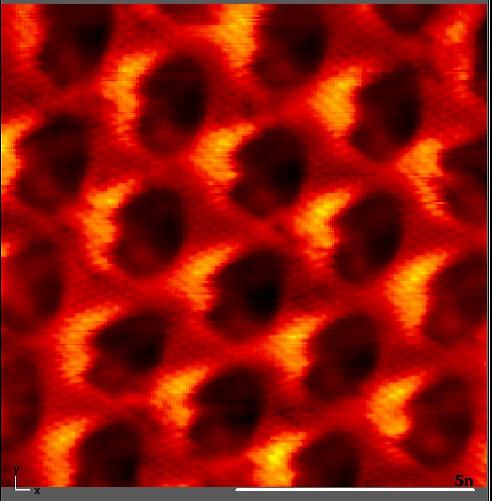 “Science is the right guide for the future”