April 24, 2015, Amsterdam. Triggered by the Press Release about collaboration, the Amsterdam-based Business News Radio (BNR) invited Syngaschem BV and DIFFER for an interview in their weekly program on sustainability.

Science and Technology journalist Mark Beekhuis wanted to know how syngas can help to reach a truly sustainable society based on green electricity. Indeed, the route from solar or wind electricty, via electrolysis of water combined with CO2 from power stations and heavy industry to syngas, which can then be converted to synthetic fuels, is the focus of our future research program in the DIFFER Institute. On the question why it is so difficult to do the simple high-school experiment of  decomposing water in hydrogen and oxygen on an industrial scale, DIFFER’s Erik Langereis stressed the high economic costs of industrial electrolysis for hydrogen production, while Hans Niemantsverdriet explained how the process would greatly benefit from cheaper and more efficient electrodes, especially on the oxygen production side.

Photo: Hans Niemantsverdriet (left) and Erik Langereis (DIFFER) in the studio of BNR News Radio for the recording of a 10-minute interview on the role of syngas in storage of green electricity.

The interview – unfortunately only in Dutch – will be on the air five times in the week starting Monday April 27. BNR broadcasts News and background information across the entire Netherlands, and reaches an estimated audience of some 100.000 listeners

Listen to the Radio Interview (in Dutch) 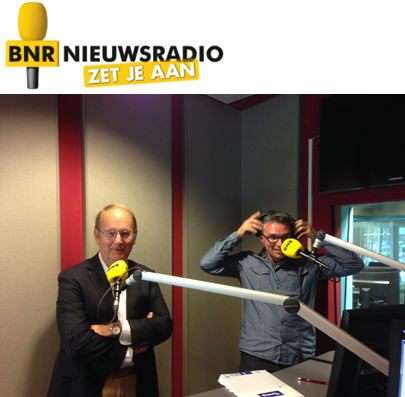