Electrolysis of water to form H2 and O2 is an increasingly important process in technology for the storage of renewable electricity in synthetic fuels. Formation of oxygen is invariably the slow step and mechanistically much more difficult than H2 evolution. The difference is certainly due to involvement of 4 electrons in the reaction, but there is another reason, associated with a particular property of O2, that seems to have been largely overlooked in the electrochemistry community, namely the triplet nature of the oxygen molecule.

In simple terms, O2 is a molecule, in which the spins of the outer electrons orient in a parallel way, making the molecule magnetic. This is in contrast to H2 and almost all other simple molecules, which bear no net magnetic moment.

The natural way in which precursors to the O2 molecule approach each other, is with spins in opposite directions, implying that somewhere in the formation of the molecule an electron needs to flip its magnetic moment. Not only does this cost energy, there is also hardly any feasible excitation mechanism for such a transition on the surface of a catalyst.

A potentially better route towards triplet oxygen would be to ensure that the precursors (O-atoms, or an O-atom and an OH group) already meet with the spins in the right direction. This would incur a magnetic surface site which orients the adsorbates while they dock just before reaction. 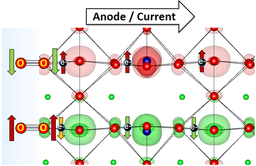 Indeed, Jose Gracia and Tingbin Lim found a remarkable correlation between the magnetic moment of antiferromagnetically ordered perovskites and their electrocatalytic reactivity for the oxygen evolution reaction, see Figure 2. Here abbreviations such as LCF or SNCF stand for perovskites such as LaCoO3 or SrNiCoFeO3-d. Antiferromagnets containing lattice planes which conduct electrons of alike spin give the best results, which to a large extent can be understood from scrutinizing their electron density of states diagrams. 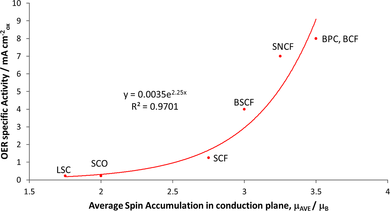 Figure 2 – The activity for O2 evolution of electrocatalytic perovskite catalysts goes up strongly when the magnetic moment of the electron-conducting crystal planes (which have to accept the excess electron of OH- precursors in the O + OH reaction on the surface) increases.

This work opens the way for computational screening of electrocatalysts on the basis of the correlation between magnetic moment (a descriptor for activity), density of states and OER activity. The next challenge is of experimental and synthetic nature, as it is not always straightforward to synthesize the materials in the predicted stoichiometry.

The corresponding scientific article has been published by ChemCatChem, and is accessible via its digital object identifyer:

In de wake of the 2016 Olympics: ‘Our cyclist’ arrives at Rio